Dense woods and mysterious circumstance sure doesn’t make for a forgettable night. You are Blake Langermann, a cameraman who alongside his wife Lynn take it upon themselves to investigate the unexplained death of a pregnant woman in Arizona. As you fly out to the region in the dark night sky, an even darker force dooms you from the start. Soon you’ll be stranded in the woods, with nothing but a camera equipped with night vision to witness not only a faction war, but a war where the only thing that seems certain is that everyone wants you dead. Run, hide, Outlast, or die.

Outlast 2 is a first-person survival horror title developed by Red Barrels and serves as the indirect sequel to Outlast. Unlike Resident Evil 7, another survival horror released this year in which firearms and blocking attacks are your greatest allies, the key difference here is that in Outlast 2 there is no such thing as effective defense. The only thing that can save you upon detection is your feet, and you’ll quickly find out that the game is absolutely jam packed with hostiles. Throughout the entirety of Outlast 2 there is rarely a point in the game that feels like a true end of a segment lest for certain flashbacks that happen semi-regularly. Once you manage to outmaneuver, by stealth or by sprint, a set of enemies there is little time at all until a new small army presents itself, sometimes spawning in such a blunt manner that forces you to be spotted multiple times over. The trademark quality one must have in order to succeed is attrition, as Outlast 2 can often be an experience in which you just simply perform a little better each time. Add in the fact that you’ll be surely punished for not exploring as you’ll need to regularly find batteries for your camera’s night vision to see the environment with and it amounts to the newest Outlast not being for the quick to dishearten. 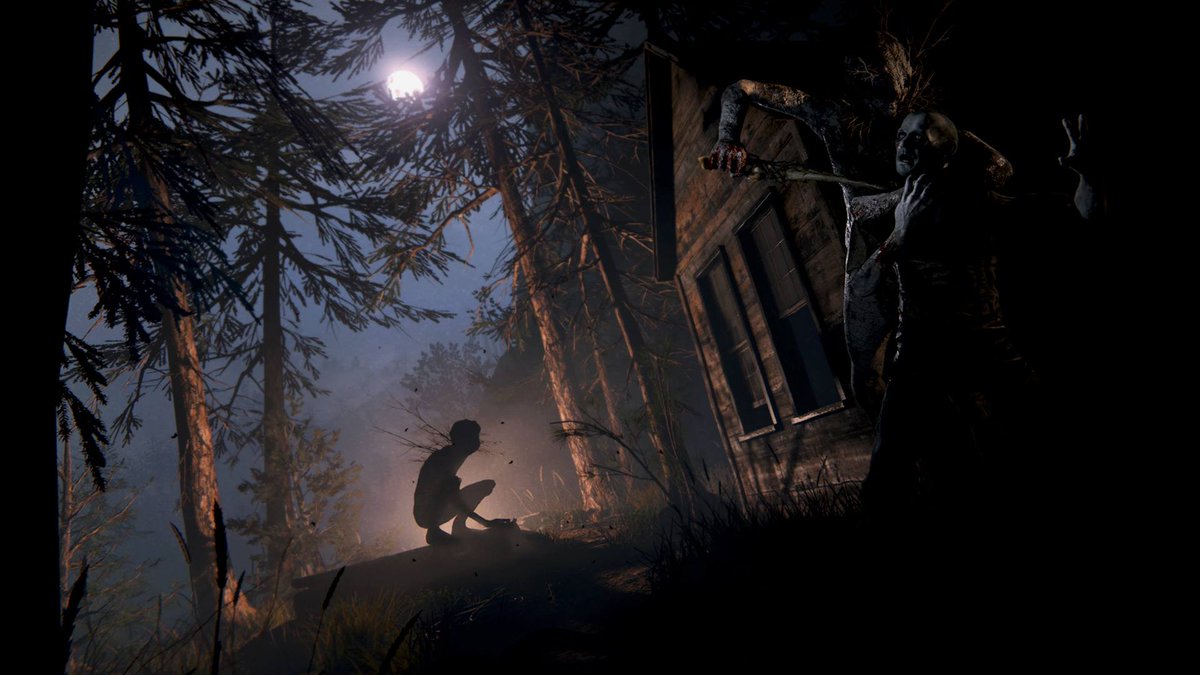 Speaking of the environment, it is an aspect that without a doubt is the strongest positive this title has to offer. The game is stunning, and the camera’s night vision functionality serves as an excuse for the dark parts of world to be literally pitch black. Such pure darkness where navigation is literally impossible adds to the euphoria of danger a player can and will feel while playing. On top of the amazing visuals, solid sound effects help to make Outlast 2 a scenery and immersion titan.

There are some things that leave a lot open for desire, however. The first few hours prove truly terrifying, but the same gripping landscape and constant pursuit formula is never recycled throughout the main portion of the game, which combined with the fact that finding new items and weapons is not a feature the game offers quickly allows a sense of repetition to set in. The overall story as well, while gripping in its intense scenes, is at a base level far too shallow overall. Red Barrels opted to go the Souls series-esque storytelling route, leaving much of the story hidden in the fine print (in this case documents). Even if the player reads into them it is still a very inconclusive story however, one that can work in some titles but unfortunately not here. When you are being relentlessly pursued like you are, not knowing what demented reasoning behind it hurts the emotion but even when the story becomes clear, the reasoning is one-dimensional; an ever-growing and ever-changing story that forces a change of perspective would have been a welcome antidote against the aforementioned repetition that gives you no choice but to be relieved once the credits roll.

There is no doubt that Red Barrels’ newest project puts survival in survival horror and while it undoubtedly delivers with flying colors in that regard, you’ll find that outlasting is the only thing that is being offered. Still, the first Outlast was very similar in that regard and if you found the first of the series a great buy, you won’t be disappointed here; if you are looking for an experience that requires grit, genuine stealth skill and multiple heart-pounding moments, then you’ve found your match. If on the other hand, you want a complete and well-rounded experience and one that does not lack a meaningful sense of progression, it might be best to patrol through some of the other survival horrors on offer first.

This review of Outlast 2 is based on the Xbox One version of the game.

6.5/10
Dense woods and mysterious circumstance sure doesn't make for a forgettable night. You are Blake Langermann, a cameraman who alongside his wife Lynn take it upon themselves to investigate the unexplained death of a pregnant woman in Arizona. As you fly out to the region in the dark night sky, an even darker force dooms you from the start. Soon you'll be stranded in the woods, with nothing but a camera equipped with night vision to witness not only a faction war, but a war where the only thing that seems certain is that everyone wants you dead. Run, hide,…
Outlast 2 Review: Rinse and Repeat
Outlast 2 Review: Rinse and Repeat
Ash Winters

User Rating: No Ratings Yet !

Ash has spent the majority of his life a huge game enthusiast, and has indeed spent many a day with numerous titles, specifically Twisted Metal, on his screen. Legend has it he’s still waiting for that sequel…

Favorite games/series: Twisted Metal, Need for Speed, The Last of Us, Bloodborne

When you tell a story taking place any time during the first half of the 20th century, you have every advantage. Industry, prosperity, war, famine, reconstruction, love, loss, politics, genocide,…