Cult classics are thankfully making a comeback in the industry, and one of the series that skyrocketed into post-launch success and notoriety is the Danganronpa series. Created and developed by Spike Chunsoft, Danganronpa strikes a familiar chord of Japanese oddities in the gaming market with franchises such as Katamari Damacy, WarioWare, and Yakuza. Danganronpa falls more in line of Yakuza with its mixture of weird meta-humor and dramatic storytelling. Another appeal that helped the once Japan-only franchise is its iconic mascot, Monokuma. You’ve likely seen this character before multiple times in message forums as someone’s profile picture. The distinct model perfectly resembles the character of the franchise, one side of the bear is cutes-y and playful whereas the other is dark and complex. Let’s dive into the first game of the franchise: Danganronpa: Trigger Happy Havoc, which originally came out in 2010 for the PSP. I’m playing the Danganronpa 1-2 Reload version on the PS4. You can get the same collection on Steam.

You must have seen this bear before. If you haven’t, you probably didn’t notice.

The premise of the game is a combination of Battle Royale (the movie) and Survivor (the game show). Fifteen students including the player enter a highly exclusive high school called Hope’s Peak Academy. Once they enter the building, they pass out and wake up some unknown time later in the high school. They gather into the gymnasium after being told so by a mysterious figure, who reveals himself as Monokuma, the main antagonist in the story. He informs the group that they are trapped in the academy, and the only way a student can escape is by killing another peer without getting caught. Once a dead body has been discovered, the class will begin investigating to find clues to suggest who killed the victim. After a while, the class will enter a trial, in which they argue with the evidence they had on who the culprit is. If they correctly decide the killer, the killer will be executed. If they chose poorly, everyone gets murdered except the murderer, and they are allowed to leave Hope’s Peak.

Since this game comprises of people imprisoned in a rather opulent facility, it’s safe to assume the narrative is primarily character-driven, which is exactly the case. The cast of characters are all unique in their own ways . . . well, most of them. The main protagonist, Makoto Naegi, is written to be painfully average and vulnerable to the world around him. The students who are killed early on in the story get far less screen time, thus their quirks are less noticeable to the player. Thankfully, the vast majority of the characters steal the spotlight. Each of the students are classified as Ultimates, meaning they excel at a specific ability. There’s the Ultimate Gambler, Ultimate Swimming Pro, Ultimate Baseball Star, and the Ultimate Writing Prodigy (in other words, me). I can easily recall their names without looking at the Wiki page: Celestia Ludenberg, Aoi Asohina, Leon Kutawa, and Toko Fukawa respectively. Each character stands out so much that I wouldn’t mind a spin-off series with any of them. Oh wait, we got one with Toko. That’s fine with me!

I wouldn’t dare spoil anything narrative wise, which sadly makes this article a challenge to write, but at the end of the game, I genuinely felt attached to these characters. While some of them are clearly weaker than the leads, that’s inevitable for a cast this large. Ultimately, the writing and character development transformed Danganronpa into something I did not imagine playing. My run time lasted about 25 hours main campaign, but I honestly would’ve preferred if there was a branching storyline which encouraged multiple playthroughs, similar to the likes of Detroit Become Human. Even though THH follows a strictly linear path, I thankfully found myself satisfied in the ending. The vibrant cartoonish style of the characters both visually and thematically may have leapt this series into its cult status with an active fanbase. Fans often identify themselves as a certain character if it best suits their personality (I’m a Naegi myself).

THH’s narrative twists and turns like it’s nobody else’s business. While to its own detriment at times, I refused to put down the controller. After each chapter ended, I kept playing for another hour or so. Cliffhangers are plentiful and new plot devices are introduced rapidly near the end. I still had some questions, though, which forced me to read Wiki entries about the game’s lore. The characters respond appropriately to the demented nature of the events unfolding. Whether it be a brutal execution at the hands of Monokuma or a sudden betrayal that ruins the relationship of the entire class, Danganronpa treads the boundaries between an engaging soap opera and an intense murder mystery. Unexpected deaths build the game’s atmosphere, so do yourself a favor and avoid going on a YouTube comment section about the soundtrack or typing in a character’s name on Google because it will probably tell you straight up in the search results. I speak from personal experience.

Speaking of the music, it’s amazing. Seriously, every single track is designed to seep into your ears and play incessantly. Think of the best Ace Attorney and Paper Mario music and blend, and you have Danganronpa’s musical score. Composed by Masafumi Takada, the music energetically captures the mood the narrative pursues. There’s synthetic beats, jazzy solos by a MIDI trumpet, and heart-racing percussion all packaged together in a deliciously catchy musical entree. It’s no wonder each track on YouTube garners hundreds of thousands of views, a remarkable (but not unheard of) feat for such a niche game in the West. 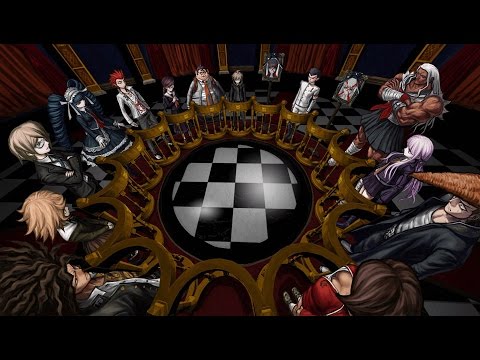 Players can thankfully choose two voice casts, English and Japanese, and personally I think you can’t go wrong either way. I played with the English dub and the voice talent perfectly matched the characters they were portraying. I definitely have to give bonus credits to the snarky arrogant voice of Byakuya Togami, the hyper and witty Monokuma, the anxious and timid Toko Fukawa (especially her ‘duality’ later in the game), and the horrifically blunt Kyoko Kirigiri. During the class trials, the dialogue becomes nearly all voice over and it’s one of my favorite parts of the trials. The class trials themselves provide an entertaining collage of Ace Attorney-style contradiction detection and diverse mini games that reveal new clues to the mystery. 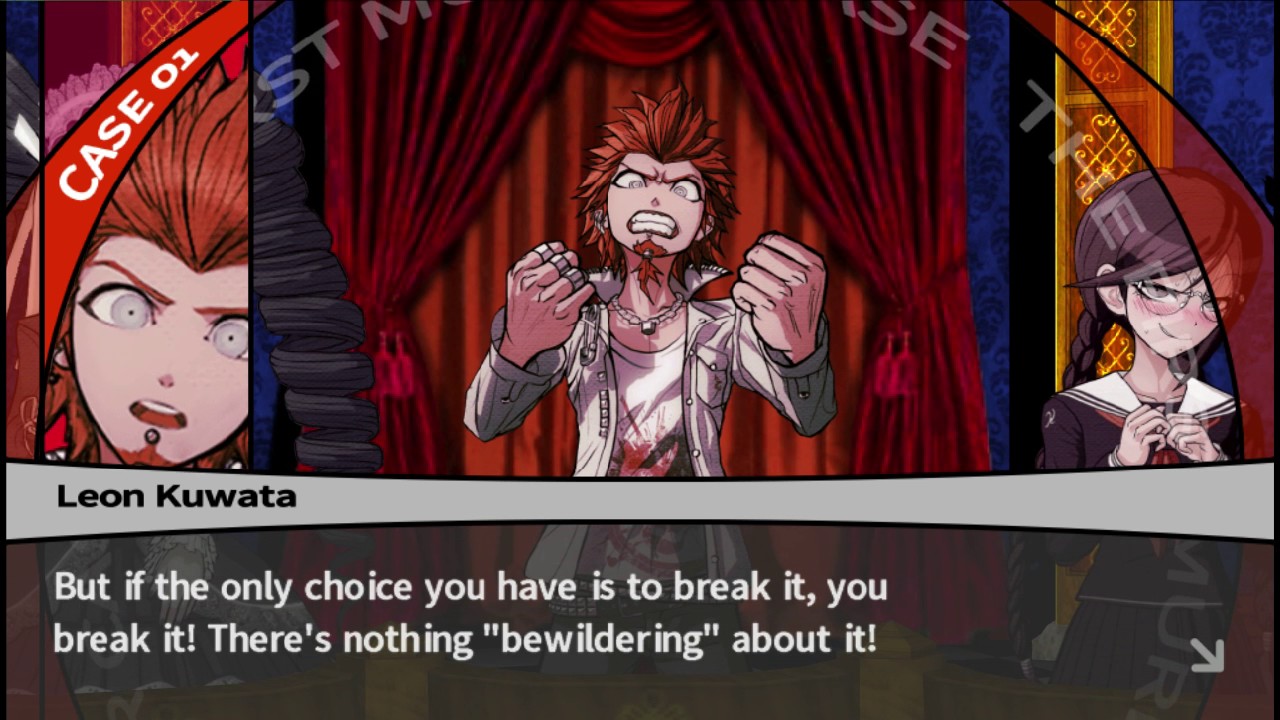 Speaking of class trials, the gameplay follows a very similar formula to the Phoenix Wright franchise. You start each chapter setting up the scene, familiarizing yourself with the characters, and bonding with allies and even potential adversaries: this part of the chapter is called Daily Life. Later on, a student is found killed by the hands of a peer, triggering the Investigation Mode: this part of the chapter is called Deadly Life. Oftentimes a character you like and connect with most is murdered, get used to that feeling of anguish as it’s that type of game. There’s very little to write about in terms of the gameplay, as there are some interesting twists in the game design. Players are encouraged to roam freely in the empty high school building during investigation and free time, but there are moments I lose myself in the map design and that might be at fault of the repetitive architectural style. 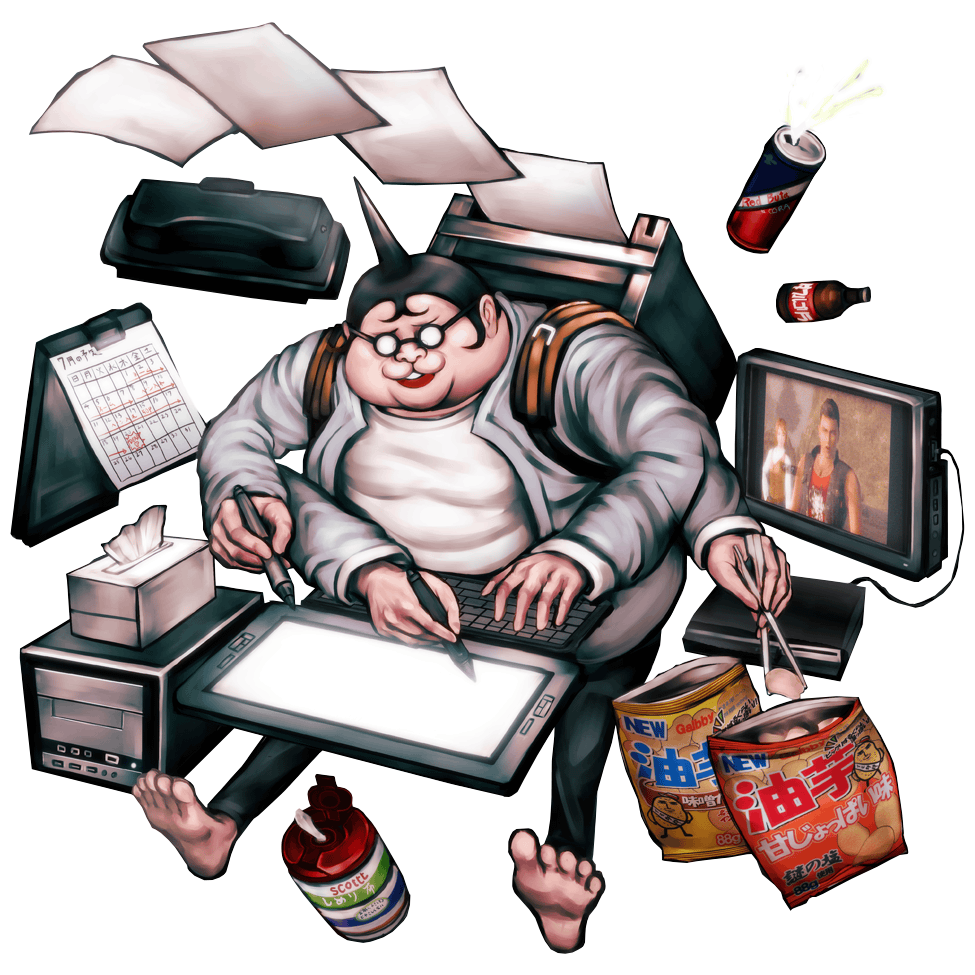 As usual for games such as Danganronpa, it’s best to stay quiet, so the best I can do is analyze why the series achieved such a dedicated collective of gamers who played it. The answer would be simple: it’s the characters that steal players’ hearts. However, I feel like there is more to it. It’s the dark, twisted humor, frequent sexual innuendos, incessant fourth-wall breaking that would make Deadpool swoon, and the intelligent commentary on Japanese culture as well as humanity’s desire to grip onto hope even in the darkest moments. This game relentlessly throws new plot twists and character diversions that keep the players on their toes. The fast-paced, energetic atmosphere as well as its fantastic soundtrack wins the hearts of a certain group of gamers. When the series hit the West, NIS America flawlessly localized this game so its transition was seamless and natural. Ultimately, this game fills a special void in millions of avid gamers such as myself. At the end of the day, I cannot resist but to dive headfirst into what this series truly has to offer.

For fans of the Danganronpa series, what do you love most about it? Is it the character connections, the illustrations, or Monokuma himself? For those still unsure about this game, do yourself a favor and get the 1-2 Reload remaster on PC or PS4. It’s cheap and should provide a unique twist on the visual novel genre.

I’m giving this game an (inform 8/10. Next time I’ll write about Danganronpa 2: Goodbye Despair hopefully with similar thoughts. So far, it’s even crazier.

Side note: “Danganronpa” is a combination of the Japanese words “truth” and “bullet”, something very handy during class trials.