Finding yourself trapped indoors with nothing but your internal monologue to sustain you can drive a person really insane really quickly. From a strictly medical standpoint, you should be playing video games right now. This is what I have been doing with most of my time between telecommute sections, which led me to explore video games that I had previously stopped playing. Way back in 2013, Gameloft released a mobile game called Asphalt 8: Airborne, which was a hard hitter (as hard as a mobile game can hit) due to its fast gameplay and bangin soundtrack. It was followed up by Asphalt 9: Legends in 2018, which was basically the exact same game. The gameplay consisted of trying to steer a car on a screen smaller than your palm, which led me to download it, play it for roughly 5 minutes, close it, and then never think about it again.

A year later, Asphalt 9 came to the Nintendo Switch, which was the game’s missing secret ingredient that made it significantly more enjoyable. Playing with a proper joystick makes it endlessly entertaining, and it is one of the best looking games on the Nintendo Switch right now from a graphical standpoint. Who would have thought that a game optimized for 5 year old cell phones would run really well on a 5 year old cellphone with controllers stuck to the sides? 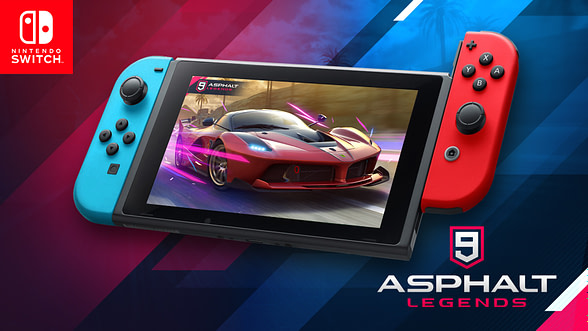 For me, the main selling point is the game’s soundtrack. Asphalt 8 set the stage with 9 songs from 3 genres that you could choose from. Admittedly, they all slapped, but there weren’t that many of them. Asphalt 9 has around 70, and they all appeal to some primal part of my brain that absolutely loves fast-paced EDM music. I have a playlist of of music called “songs to get railed to” which almost all of the songs from this soundtrack have made their way into. These are songs that sound like they could be anime openings, songs that make you want to dramatically drift around a corner, songs that you want to race impossibly fast-accelerating cars to. This music is ESSENTIAL to creating the game’s experience, along with its wonky physics. The music makes you feel cool.

Now, I’m an Aerospace Engineering student who’s spent an unhealthy amount of time working with computers. I’ve put together some of my gameplay to highlight how the game’s physics engine works.

Aside from the way you can Nitro in the air and go faster, while spinning, without changing your direction, the acceleration behaves a lot differently than it does in real life. In the first clip, we accelerate over the span of 3.9 seconds, from 125 miles per hour to 264 miles per hour, according to the in-game speedometer. That is 139 miles per hour, or 203.9 ft/s, over 3.9 seconds, which gives us an acceleration of 52.28 ft/s^2. This is actually way lower than the real Lamborghini Asterion’s acceleration, which is around 88 ft/s^2. Interestingly enough, we see the car’s in-game 0-60 in the next clip at around 1.15 seconds, which is way faster than the car’s actual 0-60 which is roughly 3 seconds. Next you see how the car can magically accelerate in air, and then we see the car accelerate from 137 to 202 MPH in 1.33 seconds, which is 71.7 ft/s^2. I’ve also included the McLaren P1, which has a real life 0-60 of 2.6 seconds, hit 60 in 1.9 seconds.

The point I’m trying to make here is that the game engine doesn’t adhere to real physics. Most other racing games, like the Forza and Grid franchises, try to be as real as they can. Realistically simulating a car’s driving statistics is very cool, but those games don’t have the same kind of short-burst intensity that this one does. It also doesn’t suit itself very well to the game’s form factor- it’s hard to play a 2 hour long race with pit stops while waiting in line at a Starbucks. Specifically for this game, this is a good thing. It allows any player regardless of experience to pick the game up and enjoy it without requiring you to climb a mountain and study with monks to learn gamesense. This disconnect between real-life physics and the game’s “cool” factor makes it a deliriously fun experience and is an important part of its game design. At a fundamental level, regardless of technical or graphical innovation, a game sucks if it isn’t fun.

Somebody tell me how many bitcoins this is

This game is, unfortunately, riddled with the typical microtransaction saturated-internal-currency mechanics that plagues other mobile games, but they’re reasonably kept in check. What prompted me to play it again was them giving players a couple of new cars because of the pandemic, so at the very least you can go and paint yourself a shiny new vehicle to crash immediately. Overall, this game is a genuinely fun experience with a little mobile game grit and grime coated on top. It’s free on the Switch and on Mobile, so check it out if you’ve got the time. Just don’t spend a bunch of money opening “card packs” in the “legend store”.

Keith O’Donnell is an Aerospace Engineering student at Rutgers University. He’s an avid gamer and photographer, violinist, and a professional IT Specialist. His pronouns are He/Him. And yes, that picture is me in a Sonic cosplay immediately before going to the the Sonic movie in theaters.